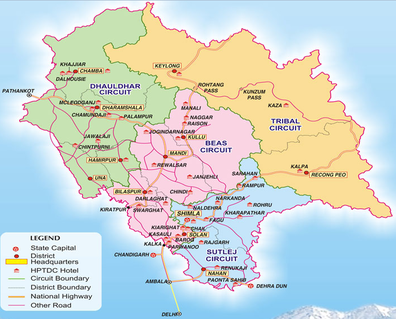 Map Curtsey for HIMADRI @ HPTDC
$$$$$.....Experience the Soft Trekking, Snowline - Glacier Trekking,Outdoor Adventure, White Water Rafting, Paragliding, Skiing, at Himachal The Himalayan State with Local-Himachali, Professional & Expert Team of Himadri Holidays & Events - Himadri Tour Trek & Adventure Gears ...$$$$$
Himachal Pradesh : A Good Combination for Leisure Excursion & Outdoor Adventure Lovers -
Himachal Pradesh Located in the northern India, Himachal Pradesh is well renowned as land of Gods & awesome snowy mountains. It is the home to some of the charming hill stations. Blessed with scenic natural beauty, the state of Himachal Pradesh features mighty snow-covered peaks, forests, beautiful lakes, bubbling streams, meadows and magnificent landscapes. The state is dotted with countless tourist destinations. Some of the popular tourist destinations in Himachal Pradesh are Shimla, Kullu-Manali, Dharamshala, Palampur, Solan, Mandi, Dalhousie, Chamba, and Lahaul & Spiti. These destinations, each dotted with various natural beauties, temples and monasteries, attract plenty of tourists and devotees from all over the world. Himachal Pradesh is a state in Northern India. It is spread over 21,495 sq mi (55,673 km²), and is bordered by the Indian states of Jammu and Kashmir on the north, Punjab on the west and south-west, Haryana and Uttar Pradesh on the south, Uttarakhand on the south-east and by the Tibet Autonomous Region on the east. The literal meaning of Himachal Pradesh is Region of snowy mountains.

Himachal : Places of interest and Attraction -
Shimla - Is one of the most enchanting hill stations in India as well as well as the capital city of Himachal Pradesh. It is popularly referred as the 'Queen of Hill Stations' because of its picturesque natural beauty. The tourists come across numerous tourist attractions in Shimla including heritage sites, malls, magnificent landscapes and picturesque hills. Major tourist attractions in and around Shimla are the mall, Christ Church, Jakhu Hill, Shimla State Museum, Indian Institute of Advanced Studies, Kufri, etc

Kullu & Manali - Is among the most popular tourist destinations in Himachal Pradesh. The Kullu valley is spread along both sides of the Beas river. Manali is situated at a distance of about 40 km from the city of Kullu. Due to refreshing and pollution-free atmosphere, these destinations are preferred by the holidaymakers, honeymooners as well as sport lovers. The city of Kullu is well-known for its colorful Dussehra festival. Manali is mainly popular for the adventure sports like trekking, mountaineering, hiking, skiing, paragliding, kayaking and mountain biking.

Mandi - Situated on the banks of the Beas river, Mandi is one of the leading tourist destinations in Himachal Pradesh. The town is dotted with many holy temples and great historical monuments. The town also consists of several palaces and orchards, showing the colonial influence on Indian culture. Major tourist attractions in and around Mandi are the Lomesh Rishi Temple, Buddhist monastery, Sunder Nagar, Prashar, Shikari Devi, Koyla Ma Temple and Joginder Nagar. Overall, some of the main attractions in Kullu-Manali are Bijli Mahadev Temple, Great Himalayan National Park, Manikaran, Hadimba Temple, Rohtang Pass and Roerich Art Gallery.

Dalhousie - The wonderful hill of Dalhousie is situated about 92 km away from Dharamshala. This destination is preferred by several tourists due to its fresh and healthy atmosphere and peaceful surroundings. Major tourist attractions in Dalhousie include churches, Satdhara, Khajjiar, Marquis of Dalhousie, Subhash Baoli and Panchpula

Solan - Solan is the gateway of Himachal Pradesh. It attracts plenty of tourists with its excellent picnic spots, ancient temples and architectural colonial wonders. It is considered as the trekking haven for the nature lovers. Being famous for the mushroom cultivation, Solan is referred to as the "Mushroom City of India".

Dharamshala - Located in the heart of the snow-covered Dhauladhar range, Dharamshala is popular for its dense deodar and pine forests, snow-capped peaks, picturesque hills, magnificent lakes and huge green tea gardens. Norba Linga Institute is one of the significant tourist attractions in the town. Besides natural beauty, the city is famous for its temples, monasteries and other holy places. It is an abode of the spiritual leaders including the Nobel laureate Dalai Lama.

Chamba - Blessed with some of the most spectacular and beautiful landscapes anywhere, it is a travellers paradise -lofty snow peaks, deep gorges, lush green valleys, fast flowing rivers, enchanting mountain lakes, flower bedecked meadows, beautiful temples and monasteries steeped in time. May it be for relaxing, sightseeing, trekking, mountaineering, fishing, para-gliding, skiing, ice skating and golf, the higher reaches of the Ravi Valley, just 56 km from Dalhousie, Chamba is perched on a little plateau about 100 m above the river. The capital of an ancient kingdom, Chamba was founded in 920 AD by Raja Sahil Varma who named it after his favorite daughter Champavati. Isolated in this valley by the high ranges, Chamba developed its own style of architecture and art. Much of this heritage has been preserved and Chamba is known for the elegance of its temples and for its exquisite miniatures and handicrafts.

Khajiar - Also known as mini Switzerland of Himachal pradesh this beautiful scenic place located south of the Distt. head quarter Chamba , You can find a small lake here in between a large landscape covered with Cidar trees all around . There is also a temple of local Snake god in Kahijiar , people enjoy the rides in air balloons & horse riding

Bir/Billing - Situated in the east of Distt Headquarters at Dharamshala of Distt Kangra  , Bir Billing valley is famous for the landscape heights , very much suitable for Para gliding , Once in a year the World Pre Para Gliding championship is being organized by the local authorities .

Nahan - an old town of Sirmaur district lies sleepily on a low wooded ridge at an altitude of 930 m. It retains its narrow cobbled streets and has an old bazaar dating to the 17th century. Raja Palace, an old palace of the town is closed to visitors. Major attractions of the town include Ranzone Palace facing Chaugan (the Royal polo Ground), the lively Jagannath temple in the bazaar and Chir Pine forests on the Vila Round. The popular site to visit around Nahan is the famous Renuka Lake. Lying 42 km east of Nahan, the lakeâ€™s shoreline traces the shape of a sleeping woman. This lake has got mythological importance. According to the mythology, Renuka was the wife of Sage Jamadagni and mother of Parsurama â€“ an incarnation of Lord Vishnu. She was killed by her son at his fatherâ€™s command but miraculously came back to life to disappear again. The lake hence took the shape of her body. A fair is held every year in the month of November to remember this miraculous incident. The other worth visiting places around Renuka are Renuka Sanctuary, Choordhar foests, Wild Life Park and Gayatri Temple.